“In every age someone, looking at Fedora as it was, imagined a way of making it the ideal city, but while he constructed his miniature model … and what have been until yesterday a possible future became only a toy in a glass globe.”
- Italo Calvino, Invisible Cities
This carpet captures narratologies in Ahmedabad’s past, present and possible. Our Narratologies of Ahmedabad carpet is about how we perceived the Riverfront, and the phenomenal relation between architecture and its geography. Showing the encountered city’s geometries and destinations, this carpet presents how we, as travellers in Ahmedabad, depict the journey and the elevations of the encountered architecture, rather than the geometry of a satellite map.
The carpet portrays four current cities in Ahmedabad: The Walled City, The Neo-liberal city, The Outer City and The Post-independent City of Modernity; two possible cities: The Salt March City and The Sabarmati City.

Printed carpet and unfolding motion.
Material: Chenille. The size of the physical carpet is 1607 mm height by 825 mm width, and
it is printed on chenille fabric [330gsm]. 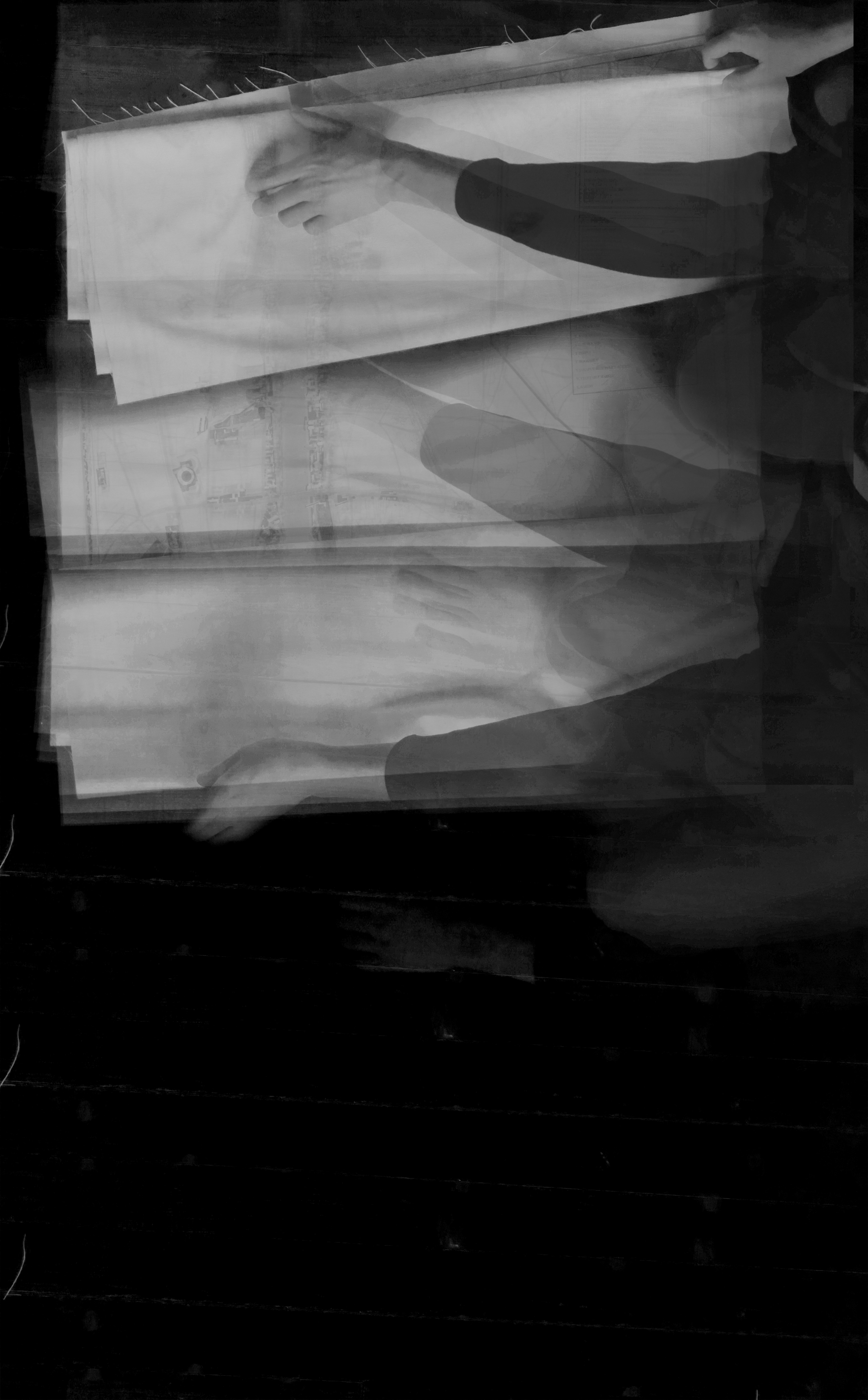 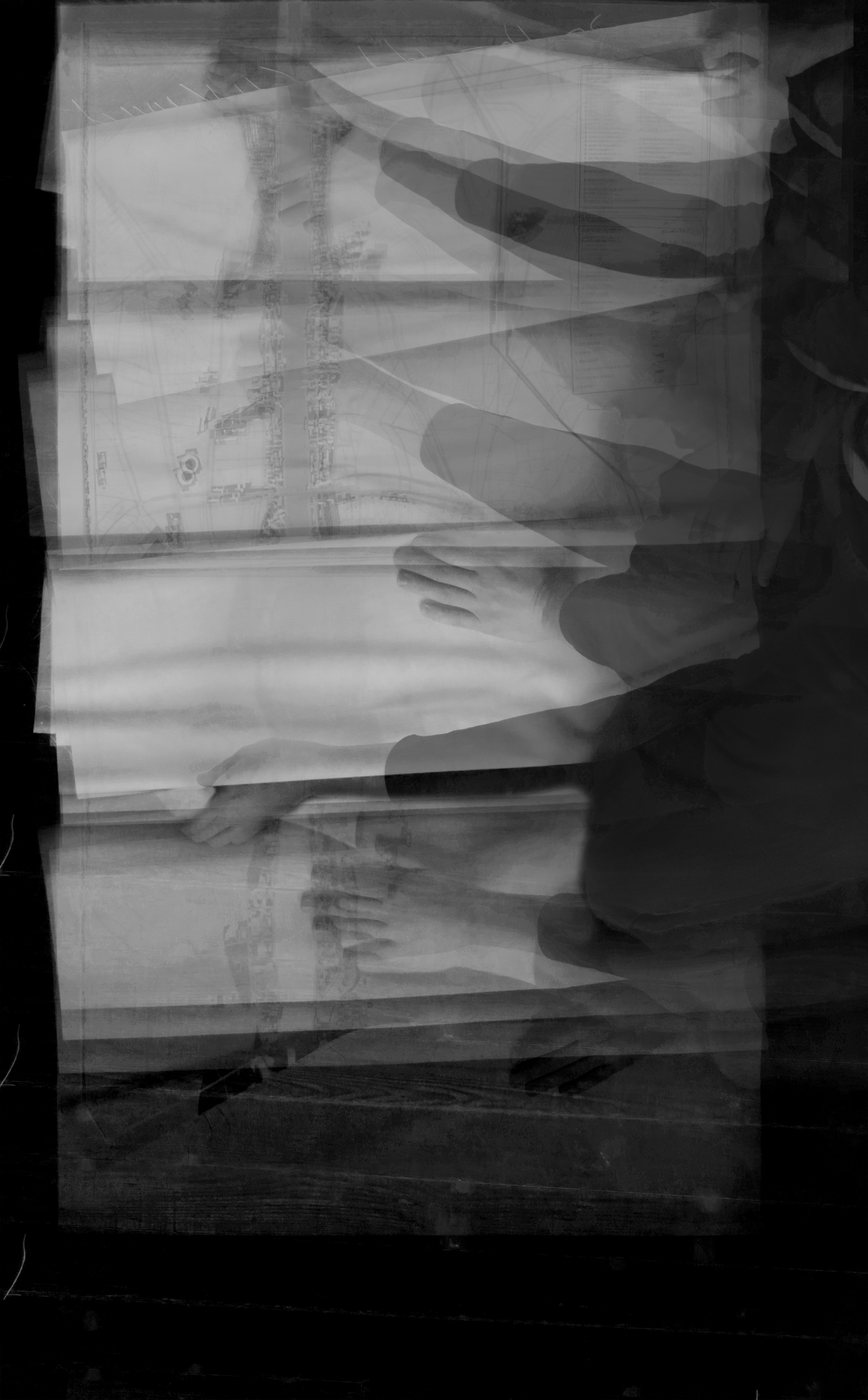 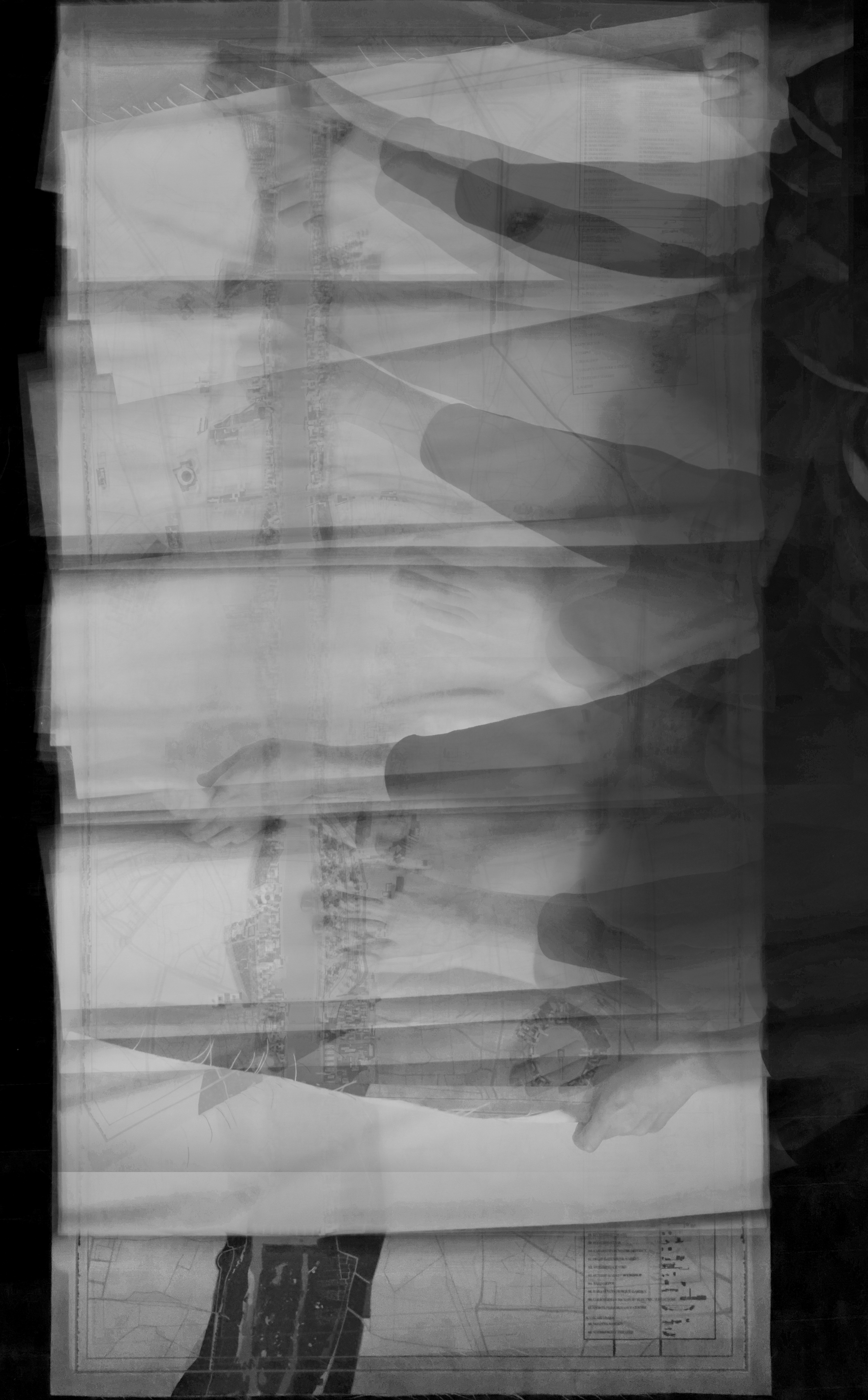 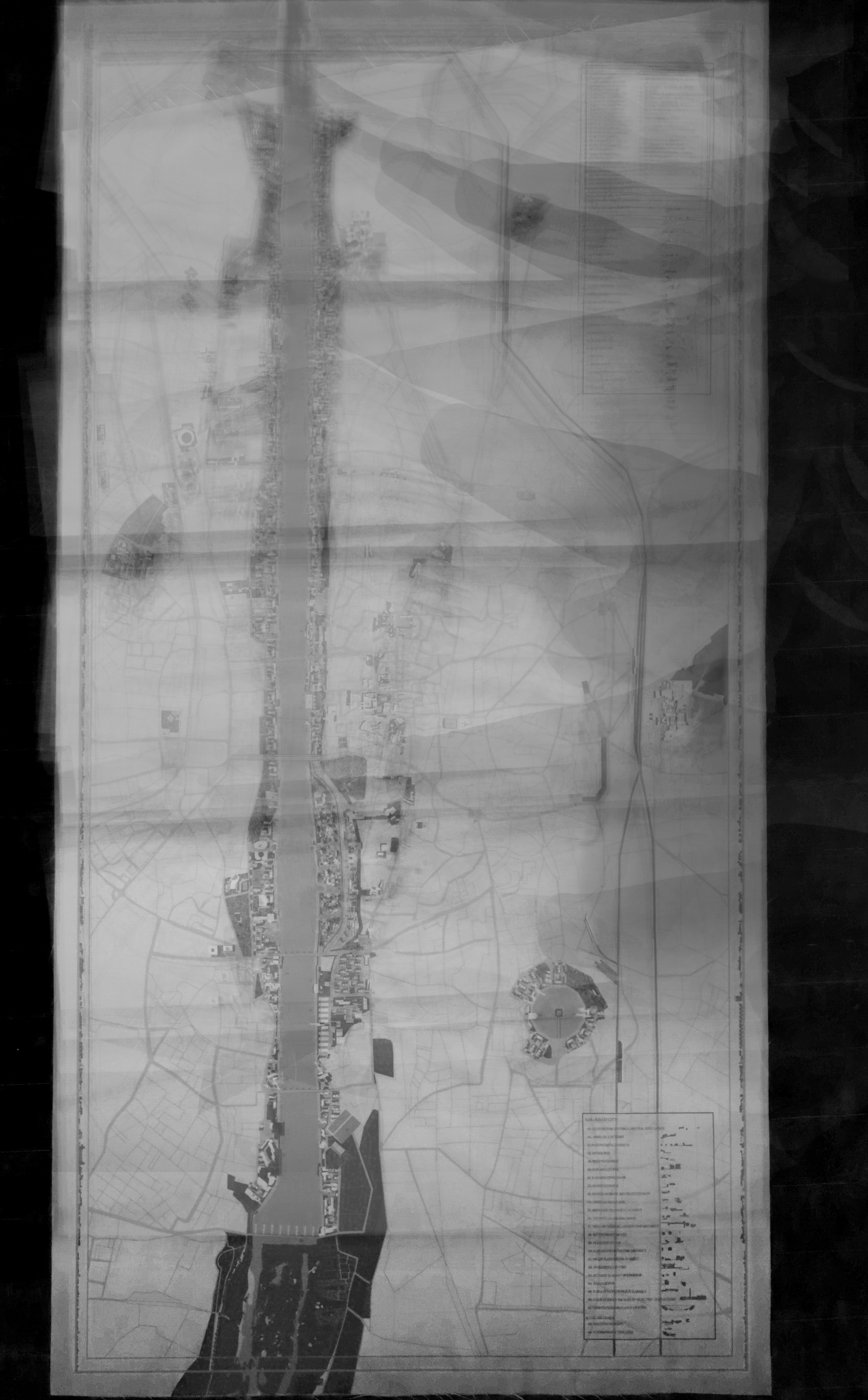 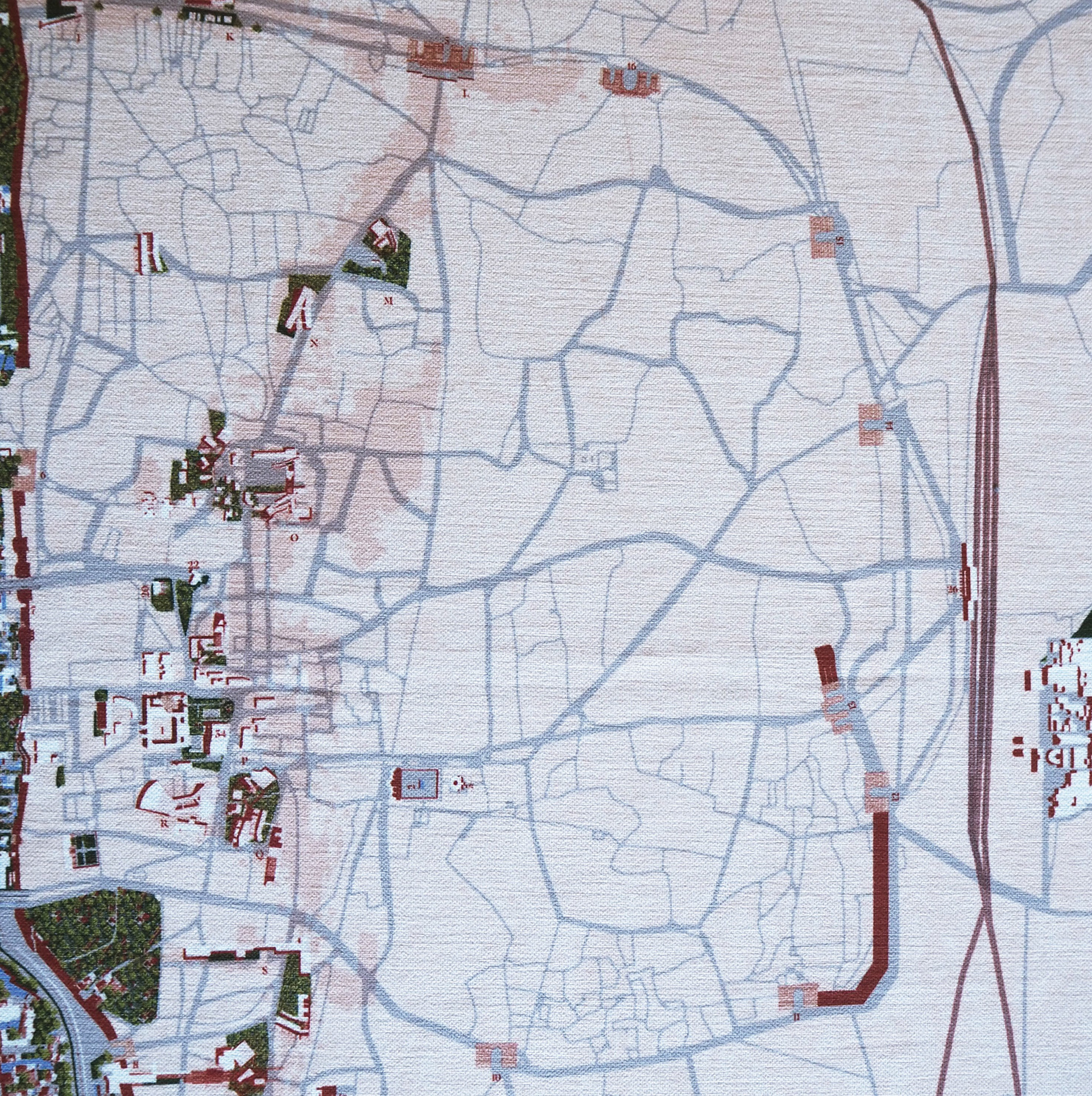 The Walled City
Ahmedabad was founded in 1411 as a new capital of Gujarat Sultanate by Ahmed Shah. The city of Ahmedabad represented the ambition of its Sultan to start a great lineage of Kings to be hosted in the city. It was positioned on the crossroads of caravans and ports moving in and out of India. The walls were supposed to protect the wealth of the Gujarat capital from invaders. Yet, over a hundred years later it came into a decline and by 1572 Ahmedabad became a part of the Mughal Empire.* Over the centuries the capital of Gujarat turned into rather a regional centre supplying ambitions for other cities, such as Agra, Delhi and London.
As the wealth was leaving in form of taxes and trade for geopolitical reasons, the walls became of no use and fell into disrepair. The carpet presents the current state of the walls and gates, as they were surveyed by our design studio during the visit. It also presents the few places of Sultanate heritage which are now mainly a tourist attraction.
* Gillionm, Kenneth. Ahmedabad. A Study in Urban History (Australian National University Press:
Canberra,1969). p 14. 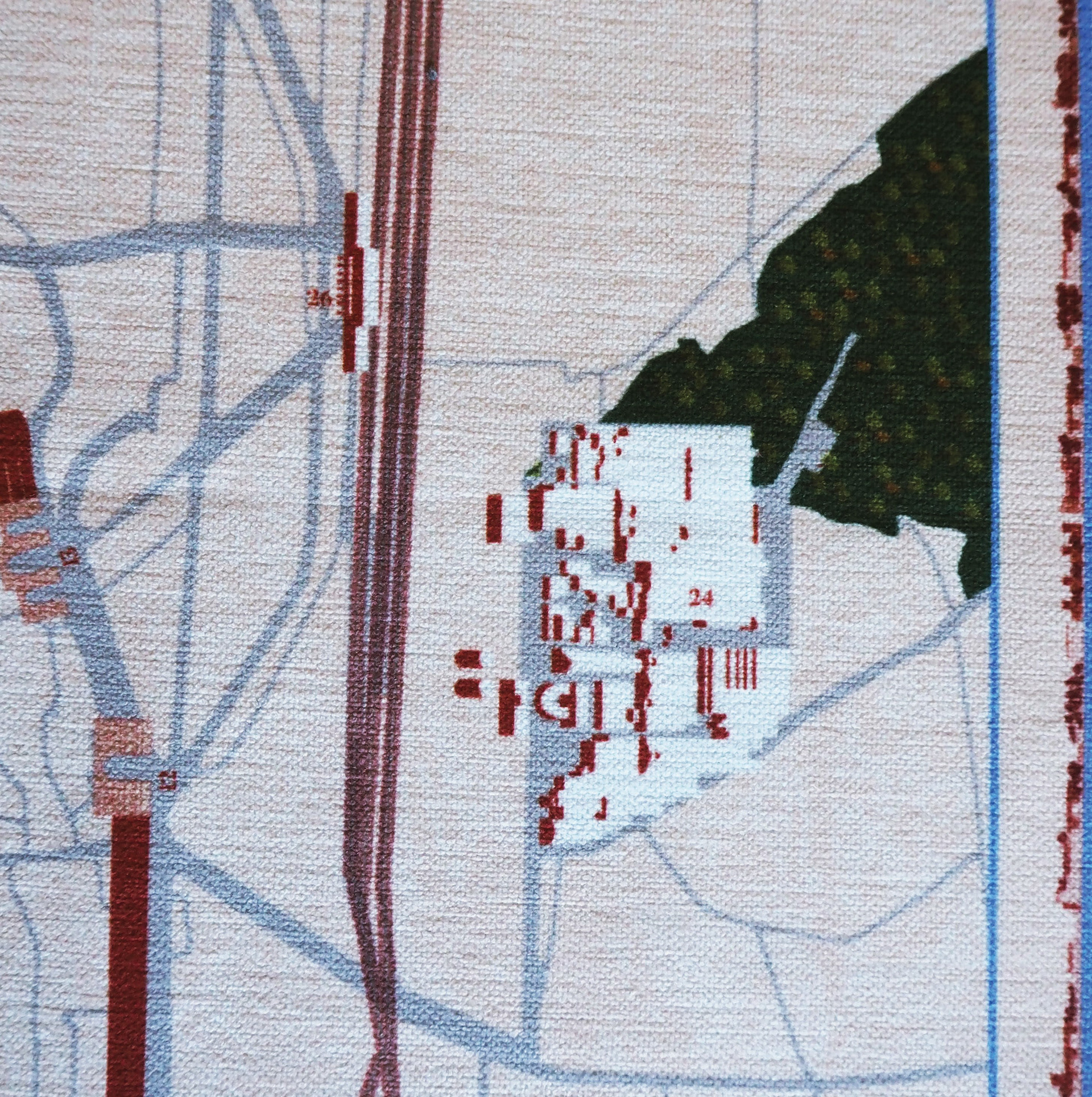 The Outer City
The outer city of Ahmedabad emerged on the grounds of the city’s talent for commerce. The hard working entrepreneurs saw the opportunity in the textile industry and soon textile mills started emerging. By 1930 there were 51 mills across the city and it became known as the Manchester of India.*
The success of the textile industry was also driven by a will for independence. One of the most prominent mill owners - Kasturbhai Lalbhai (Arvind Mills) was a follower of Swadeshi - the independent movement started by Gandhi. The mills were an important part of the movement, according to which, Indian industry had to be self-sufficient to boost the economy independent from British rule. The outer city is not just the city outside of the walls, but it is the city looking outwards, to the future, and envisioning the strong and independent India driven by Gujarati textile industry. 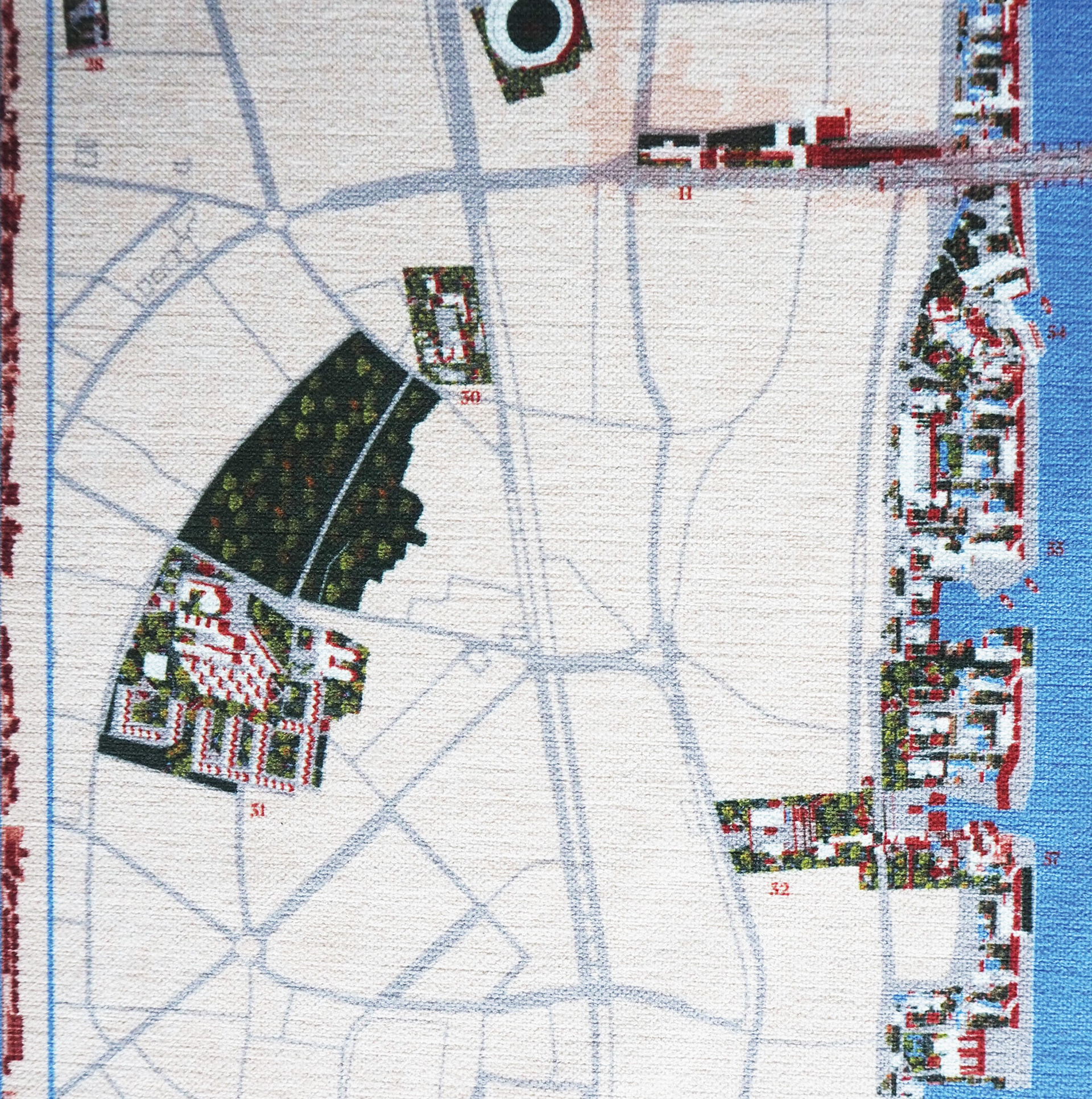 Post-Independent City of Modernity
After Indian independence in 1947, a new city emerges in Ahmedabad. Driven by finance and ambition  of the Mill Owner Association and, particularly, by its head Kasturbhai Lalbhai, this modern city of Ahmedabad was constructed on the West Bank as a progressive city, overlooking the old walled city from over the river.
Lalbhai convinced the mill owners to finance the creation of the Indian Institute of Management, which then was built in Ahmedabad by Louis Kahn.* A few more universities such as The University of Gujarat and CEPT emerged at that time. The Mill Owner Association also invited Le Corbusier to complete a series of projects, out of which, Mill Owner Association Building and Villa Shodhan  in  1950s. The patronage of the mill owners make up the most fragmented of the cities, yet one of the most significant, as the institutions of progress founded at the time still carry their influence over Ahmedabad.
*IIMA Archives. “Shri. Kasturbhai Lalbhai”. Accessed in 2021. https://archives.iima.ac.in/firstdecade/Shri-Kasturbhai-Lalbhai.html. 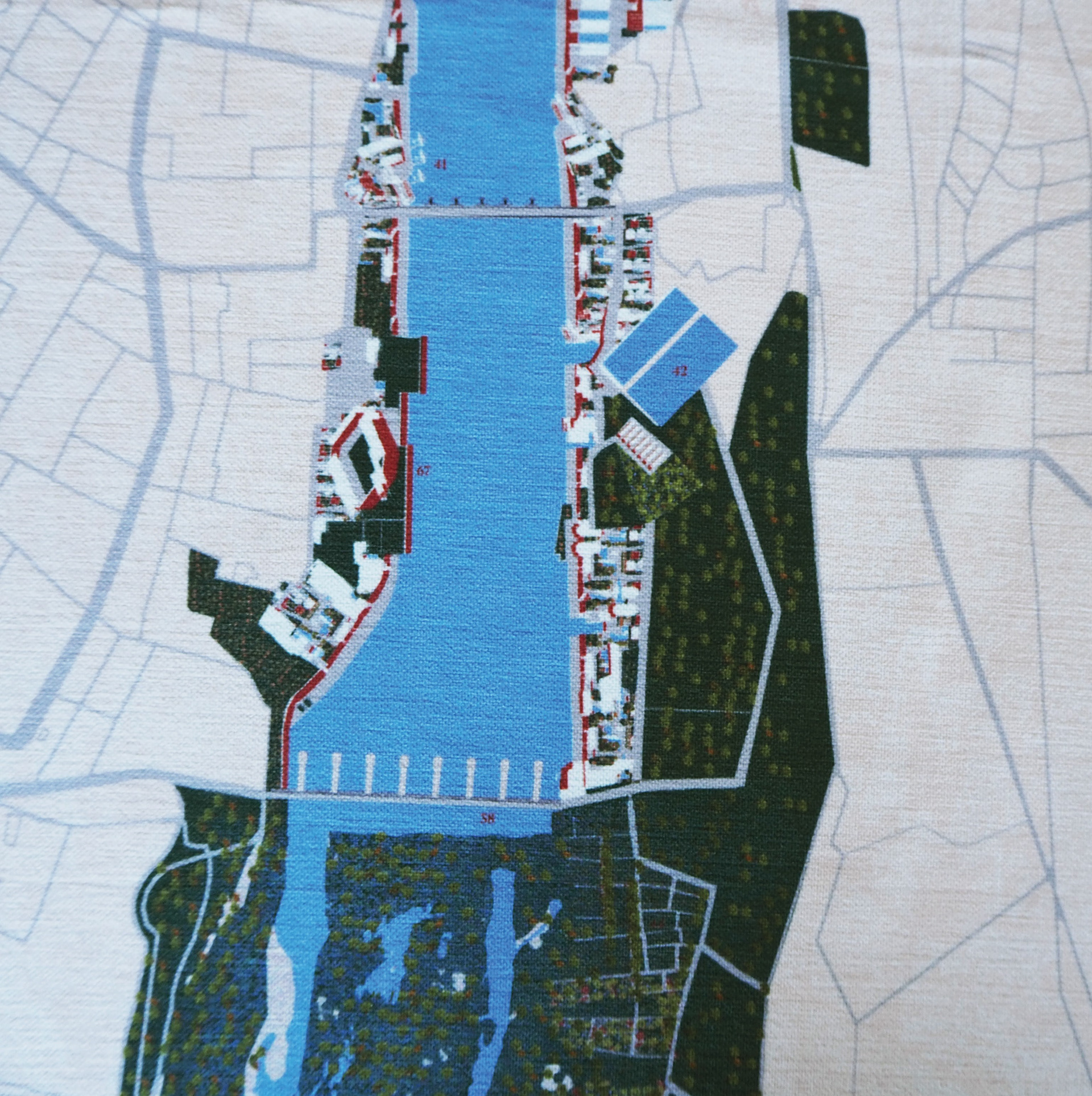 The Neo-Liberal City
This city presents the vision of Ahmedabad by the current Indian government as a Smart City. It dwells on the impression made by a rapid economic growth expressed in numbers of projects, budgets and work orders. The biggest manifesto of the ideology based on a global economy integration and technological progress is the Riverfront Project. This city, aimed “to drive economic growth and improve the quality of life of people by enabling local area development and harnessing technology”, which does not often consider local ontologies. It works on the scale of large plots and concrete walls, while the liminal conditions found in other cities of Ahmedabad are often lost as rounding errors. This is why the Sabarmati City emerges on the walls of the Riverfront. 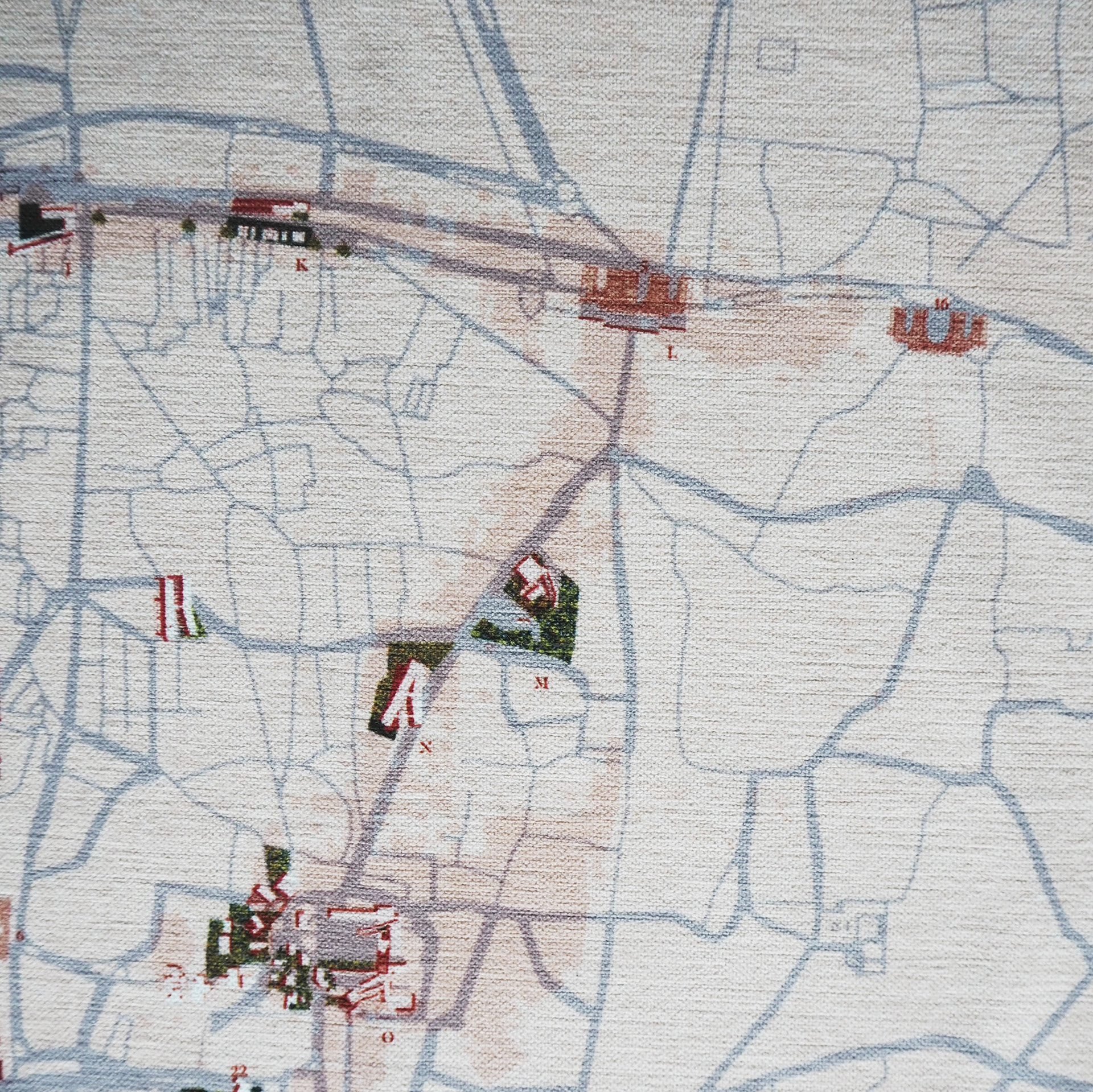 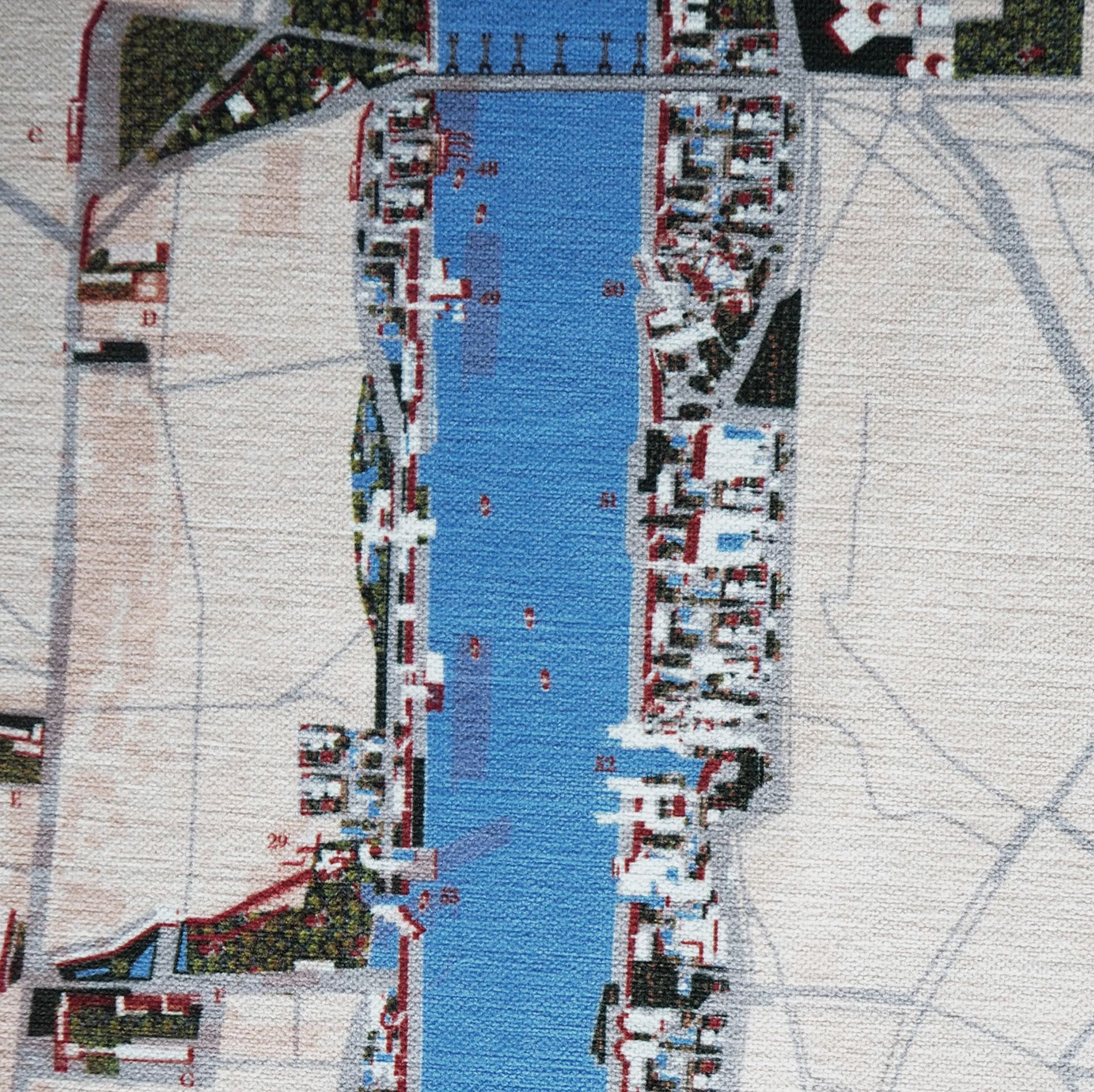 The Sabarmati City
The Sabarmati City is a counter proposal to the neo-liberal compulsions of The Sabarmati Riverfront Development. Along 11km expanse - on both East and West banks - the new series of enzymatic territories parasite as an architecture of non-violent resistance against the monolithic riverfront walls. With a variety of programmes and scales of intervention, we project the ghosts of the other fragmented cities, which in turn re-engage with wetness and reintroduce liminality between the cities and the Sabarmati.